This post will briefly introduce the major aspects and goals of smart grids. For those not familiar with electrical grids, have a look at the former post for a quick intro. This article aims to describe the challenges and requirements smart grids are dealing with. Moreover, the need for an intelligent measurement network – the advances metering infrastructure (AMI) will be outlined

Some electricity industry body defines the smart grid as follows: “A Smart Grid is an electricity network that can intelligently integrate the behaviour and actions of all users connected to it -generators, consumers and those that do both – in order to efficiently ensure sustainable, economic and secure electricity supply. ” [1]. The definition clearly refers to the challenging dynamics of renewable energy resources (RES) whose generation heavily relies on the fluctuate availability of sun light, wind or maybe tides. Unfortunately, it less clearly addresses changes in behavior whereby the smart grid should not only be capable to react on actions but should also directly or indirectly influence consumption behavior.

The upper halve of the characteristics is probably the most interesting from a retail customers view. However, the thesis I am currently working on will map to the part “Operates Resiliently to Disturbances, Attacks” of item six.

For the smart grid the basic electrical grid in the former post is enriched with new elements. The basic domain structure persists but an additional domain hosting distributed generators and distributed storage devices have been added to the smart grid blue print shown in the below figure.

The newly introduced domain hosts all sort of distributed energy resources (DER) such as generators and storages. The blueprint introduces a small wind park which contributes to the distribution domain and a PV installation with rechargeable batteries as buffer storage, Moreover, a freezer and an electrical vehicle (EV) were added to the consumer domain. Actually, the EV is not only a consumer but may also contribute to the grid as a storage in peak times. Its not the single items which are challenging for the grid but its the masses which require for more ‘smartness’. Small systems could also be grouped and centrally managed as a combined power plant to form a steady power resource. A more detailed view on improvements in the transmission and distribution domains with focus on security is given in [4]. 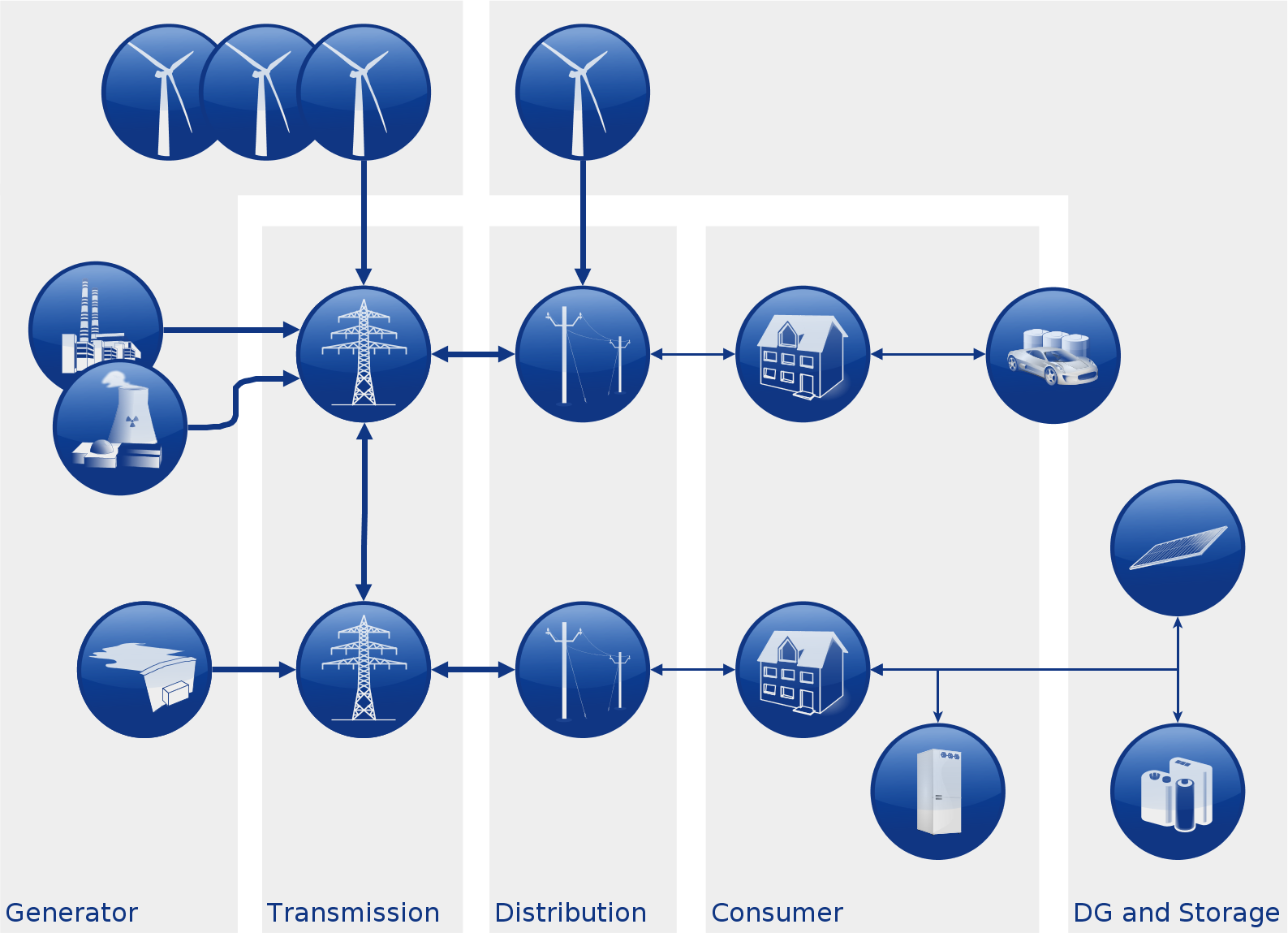 Thus, to ensure reliability of the grid the DSO and TSO must ensure that the power consumed and the power generated stays balanced otherwise efficiency and power quality (PQ) suffer. Unfortunately, poor PQ may quickly result in damaged consumer devices. To avoid such scenario, live information and detailed statistics of the consumer behavior, of generators capacity and of storage capacity is needed. Moreover, the operator will need to smartly attach or detach generators and consumer devices (EV) to their local storage or to the grid according to the power needs. The management of the grid balance is also known as demand-response. As good it sounds, management of so many components is much more complex and the recovery of a failure will demand for a controlled re-launch of DERs and bulk generators simultaneously at both ends of the grid. Additionally, dynamic-pricing or real-time pricing (RTP) or critical peak pricing (CPP) could help to reduce peak loads and would result in lower demand-response efforts. For real-time pricing, consumers will be kept informed on the current power rates. Consumers could then decide on whether to run heavy loads at the current pricing.

Hence, reporting consumption and switching loads will require a bi-directional channel being established between operator and consumer. The channel would then allow for delivery of detailed measurement from the consumer and DG side to the operators. Furthermore, it would enable the operator to actively manage DER and to push real-time information to the consumer facilities. The equipment and network necessary is known as the advanced metering infrastructure (AMI). I will provide a closer look to the AMI in upcoming posts. Stay tuned.

Why does Compass Security recommend HSTS?