As penetration testers, our main goal is to identify as many vulnerabilities as possible. This allows our customers to more objectifly assess their security level and to shut as many doors as possible which an intruder could use to break in. This process needs to be based in respect of cost-benefit, depending on risk probabily and impact. Exploitation is only a secondary objective, mostly used to facility the first one. Also – the fix for most software vulnerabilities is the same: Always update all your software everywhere as soon as possible.

In my presentation I talk about CVE-2012-1182 (“root” credential remote code execution in Samba). First I show a small analysis of the vulnerability itself. After that I outline the inner workings of the Samba heap allocator. Based on this knowledge, I describe how to develop a working exploit which circumvents typical anti-exploitation securiy features like NX, ASLR and PIE.

Here are the results of my short evaluation. I generated around 1 million processes, each printing the address of system(), collected them in a file and did some analysis. In the following table, the second row shows the number of unique addresses collected. The third row shows how many times the most common address is being used, in respect to the least common. 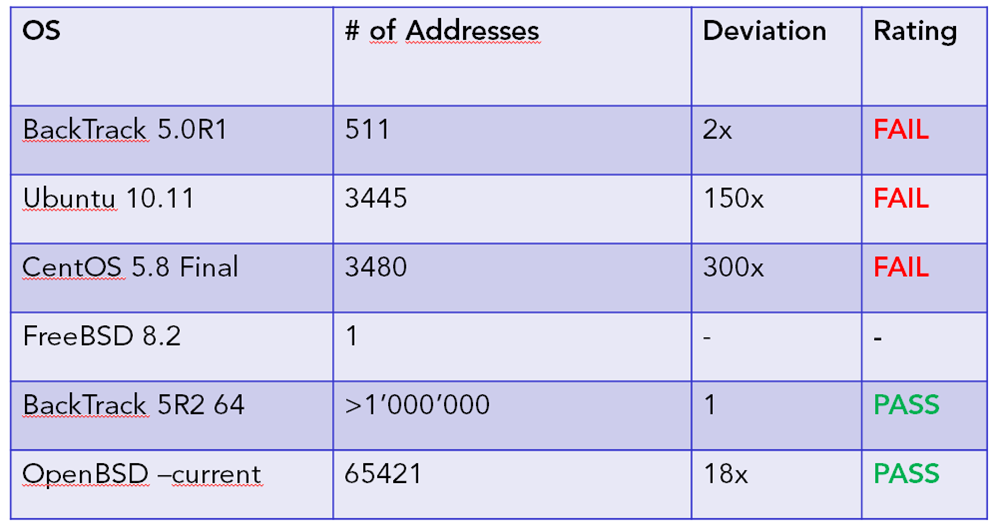 It is not really a problem to brute force around <2000 addresses in a suitable timeframe, so the 32 Bit Linux distributions receive a FAIL rating. OpenBSD does a much better job on randomizing LIBC function addresses (as expected). 64 Bit operating systems are the hardest to brute force.

More details in my presentation: sambaexploit_v1.0.pdf

AntiSamy to face XSS and XXE