Cross-Site Scripting, oftentimes referred to as “XSS”, is a common vulnerability of web applications. This vulnerability refers to the incorrect behavior of a web application to insufficiently encode user provided data when displaying it back to the user. If this is the case, attackers are able to inject malicious code, for instance JavaScript, into the affected website.

One of our main tasks at Compass Security is testing web applications for security issues. Thus, we can safely say that many current web applications are affected by this type of vulnerability, even though protecting against it is simple. For simplicity reasons, XSS is usually depicted as a popup window displaying simple text.

Such a popup would be induced by the following code:

The entire attack would look as follows, given that the parameter param is vulnerable. Assume that the following code is used by a web application without employing output encoding:

Here, user_input is the non-output encoded data provided by the user.

Then, an attacker can exploit this by setting param to

which will lead to the following being sent to the user:

resulting in the above popup being displayed.

When discussing XSS with customers, one of the more common statements we hear is: “this issue is harmless; it only displays text in a popup window”. This is not true, however, since XSS is far more powerful than often suspected. It allows an attacker to take full control over the victim’s browser. The victim, in this case, is the user who visits the attacked website. Common attack vectors include the victim’s session cookie being stolen, if it is not protected by the so-called HttpOnly flag. Further, the affected website can be manipulated so that the user is redirected to a Phishing website, allowing the attacker to obtain the user’s credentials. Finally, if the victim’s browser is outdated and contains known vulnerabilities, these can directly be exploited via Cross-Site Scripting and, if successful, lead to the victim’s computer being compromised.

Many of the above-mentioned attack vectors can be very easily tested using the BeEF (Browser Exploitation Framework) Framework (http://beefproject.com/). This framework provides many attack vectors that can be used by including just one malicious JavaScript file into the vulnerable website. Hence, instead of the above code (“><script>alert(0)</script><!–), the following would be injected:

where attacker.com is an attacker-controlled website and hook.js is the malicious JavaScript file that will allow the BeEF server on the attacker’s machine to take control over the victim’s browser.

Once the victim’s browser executes the injected JavaScript, it is “hooked”, that is, in the attacker’s control, allowing them to obtain all kinds of information such as the user’s cookies, browser type and version, etc.: 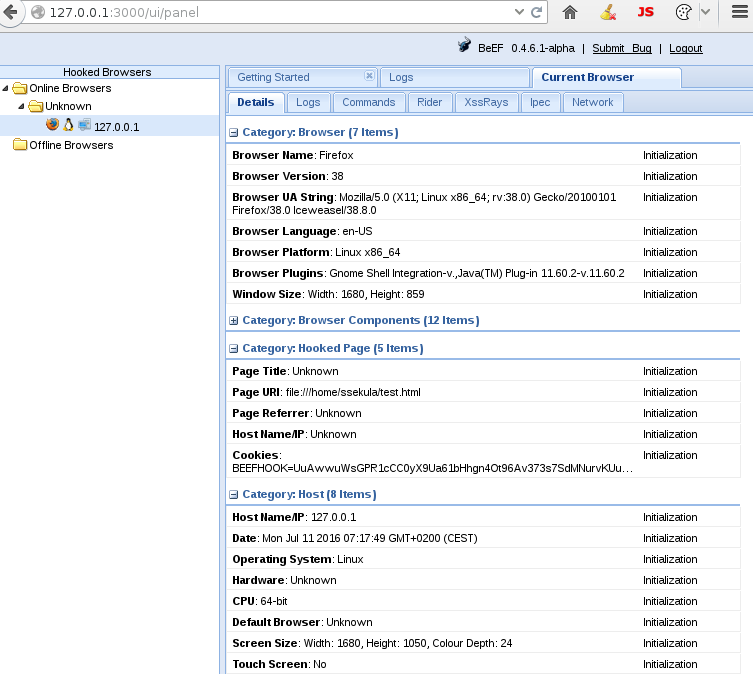 Among many different types of attack vectors, BeEF allows, e.g., displaying a password prompt to the user (in the user’s browser): 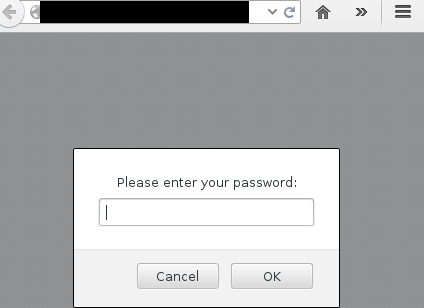 Once the user entered their password, it is sent to the attacker:

How to protect against such attacks?

Simple! Just encode user-provided data before echoing it back to the user. An effective method is to use HTML entities:
“ is encoded as &quot;,
< is encoded as &lt;,
and so forth (for a detailed explanation, refer to https://www.owasp.org/index.php/XSS_%28Cross_Site_Scripting%29_Prevention_Cheat_Sheet).

If you want to see this any many more typical web application vulnerabilities, try them out yourself, and learn how to defend against them, register for our next Web Application Security course:

The Web Application Security (Basic/Advanced) courses will introduce all major web application attack vectors via theory and hands-on challenges in our Hacking-Lab:

This website uses cookies to improve your experience while you navigate through the website. Out of these, the cookies that are categorized as necessary are stored on your browser as they are essential for the working of basic functionalities of the website. We also use third-party cookies that help us analyze and understand how you use this website. These cookies will be stored in your browser only with your consent. You also have the option to opt-out of these cookies. But opting out of some of these cookies may affect your browsing experience.
Necessary Always Enabled

Analytical cookies are used to understand how visitors interact with the website. These cookies help provide information on metrics the number of visitors, bounce rate, traffic source, etc.

Other uncategorized cookies are those that are being analyzed and have not been classified into a category as yet.