In recent investigations, Compass recognized a raise in popularity for attackers to compromise Microsoft Exchange credentials. As one of the first steps after having obtained the credentials (most commonly through phishing), attackers created malicious inbox rules to copy in- and outgoing emails of their victim. The attacker’s goal hereby was to guarantee access to emails even after the compromised credentials were changed.

In this article, we present an undocumented method that can be used to hide such inbox rules. These hidden rules remain functional, but are no longer visible in popular email clients and Exchange administration tools (on-premise and Office365 environments). The described method comes from our own research and has so far not been observed in the wild. However, similar methods might exist and could be used by cyber criminals.

In case of a compromised Exchange account, changing credentials might not be enough to stop the leakage of sensitive information. This article shows that the situation might even be worse, in the sense that not even a search for suspicious rules by your Exchange administrator, might be sufficient. An in-depth forensic investigation might be required.

The attack consists of the following 5 steps: 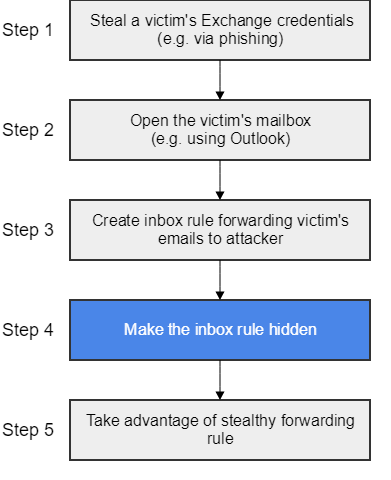 The main focus of this article lies on step 4. The described method for hiding inbox rules, was – to the best of our knowledge – so far undocumented. Step 4 has therefore been reported to Microsoft’s Security Response Center. Their reply is included later on in this article.

Steps 1/2
We assume that an attacker successfully completed steps 1 and 2, meaning that she has opened the victim’s mailbox in Outlook.

Steps 3
As a next step, the attacker uses Outlook’s wizard to create a rule on the victim’s inbox. For example, the following rule could copy all incoming emails and forward them to an attacker-controlled address. 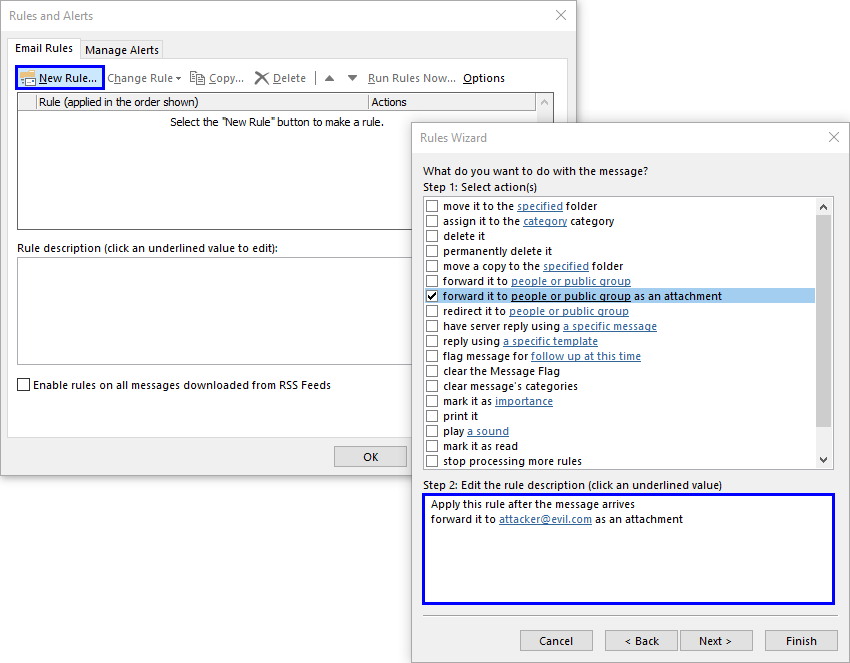 Creating an inbox rule in Outlook

After finishing the wizard, the newly created rule is enabled and visible in Outlook’s “Rules and Alerts” dialog. 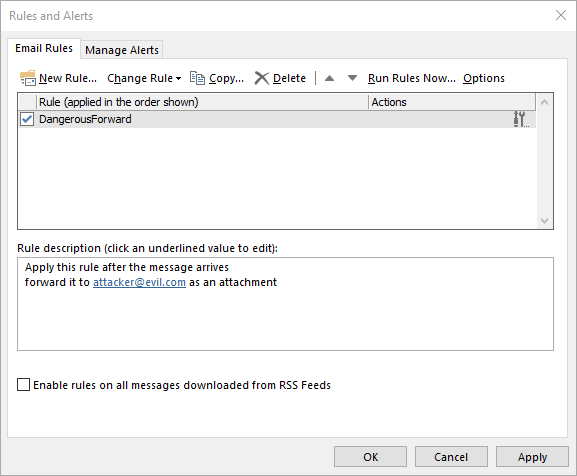 Showing the inbox rule in Outlook

Steps 4
In step 3, the attacker created a regular inbox rule to steal a victim’s incoming emails. The goal of step 4 is to hide this rule. With hiding we mean that the rule remains functional, but is neither displayed in popular email clients (such as Outlook and OWA), nor is it returned by Exchange administration tools (e.g. Exchange Management Shell).

To achieve this, the attacker makes use of Microsoft’s Messaging API. MAPI is a middleware that messaging applications (such as Outlook) can use to access the messaging subsystem of Windows. To demonstrate the attack of making an inbox rule hidden, we use a MAPI client called “MFCMapi” (recently renamed to “Microsoft Exchange Server Messaging API Editor”)[Ref. #1]. MFCMapi allows us to view and set low-level contents (raw data) of underlying Exchange storage databases.

The screenshot below shows the raw inbox rule, created in step 3, opened in MFCMapi. 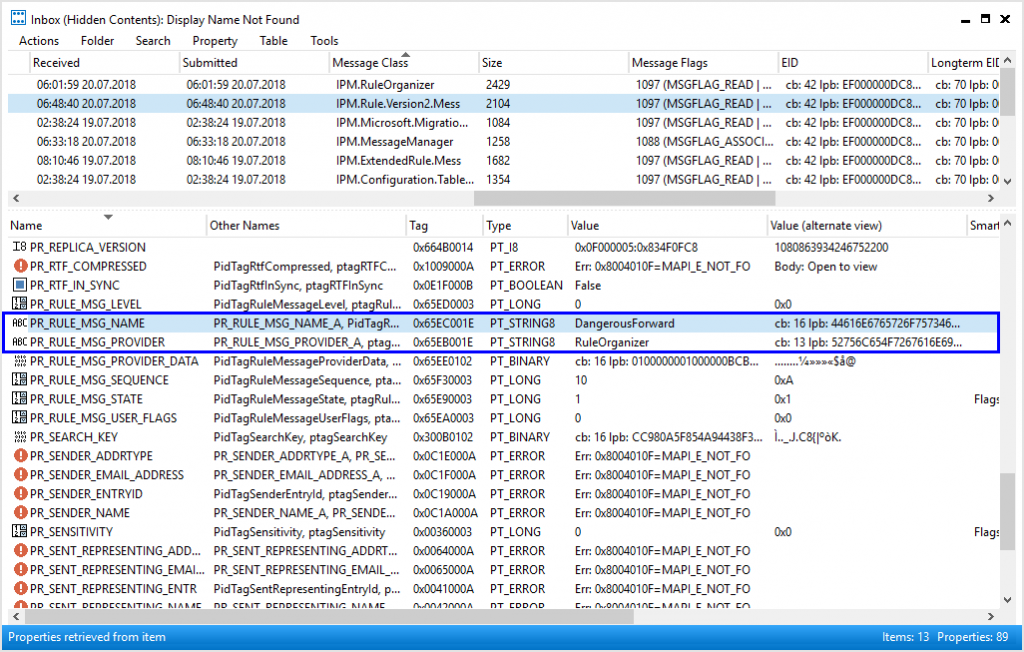 The whole magic for making the rule hidden, is to empty the following 2 properties of the inbox’s “Associated Content Table”: 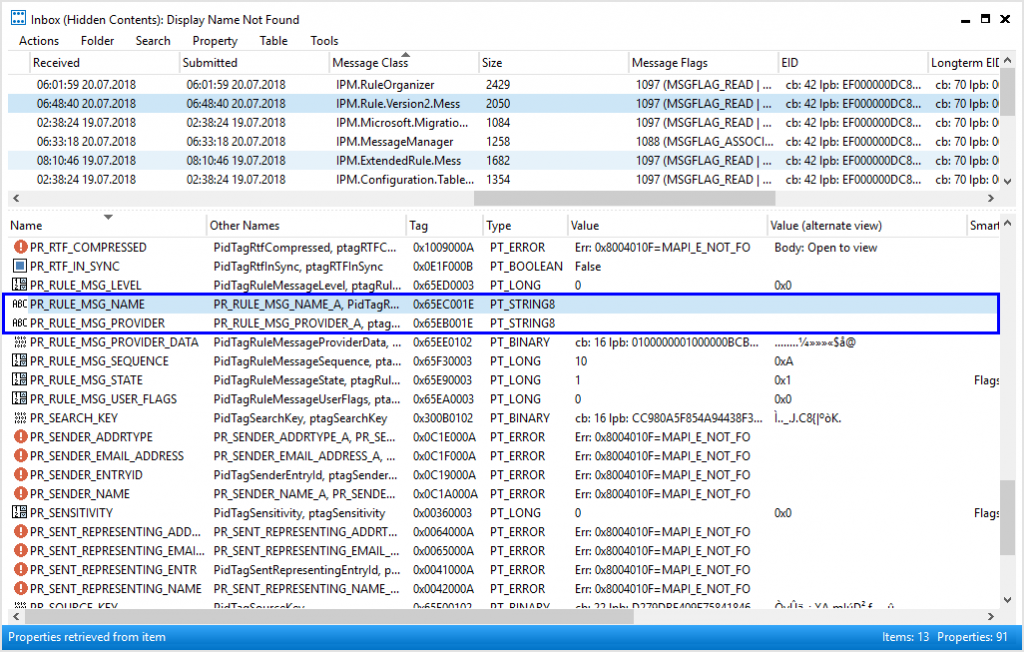 As we will see in a moment, deleting this 2 properties makes an inbox rule invisible to common messaging applications, as well as to Exchange administration tools.

Such an inbox rule is therefore much more difficult to detect, both from the perspective of a victim, but also from its administrator.

Steps 5
How to take advantage of a stealthy forwarding rule is outside the scope of this article.

Note: To automate the described attack, steps 2-4 could be scripted. Analogous to some messaging applications (e.g. Outlook), remote access to mailboxes could be handled using the MAPI over HTTP protocol [Ref. #2].

When looking back at Outlook, the inbox rule, tampered in step 4, no longer appears. Also, Outlook does not show any warnings giving the victim an indication of a corrupted inbox rule. 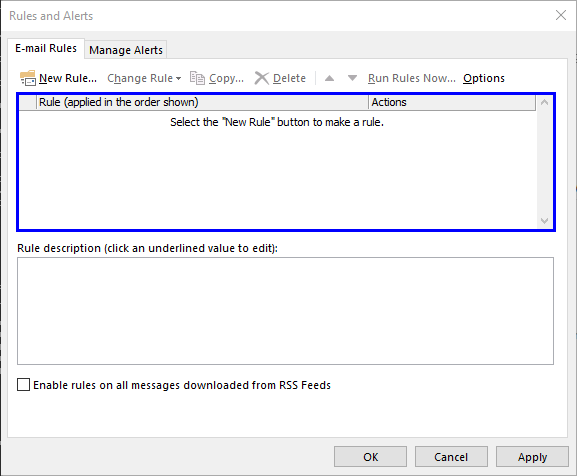 Next, we show that the tampered rule is not returned in the Exchange Management Shell (EMS). The EMS is a command line interface that enables administrators to manage Exchange servers.

With the EMS, inbox rules and their properties can be listed using the “Get-InboxRule” cmdlet. The below screenshot shows the regular inbox rule that the attacker created in step 3 above.

After the attacker performed step 4, i.e. after she cleared the afore mentioned properties, the rule is no longer returned. Despite still being functional, the rule does therefore not popup to an administrator using the EMS (or other admin tools relying on the EMS) while investigate a suspicious mailbox.

Even a Microsoft-provided PowerShell script [Ref. #3], recommended for investigating compromised accounts, relies on the mentioned cmdlet. The script is therefore not usable to detect or remove any inbox rules made hidden with the here listed method.

Note: The help of the “Get-InboxRule” cmdlet lists a flag named “IncludeHidden”. However, when showing the help in full details (Get-Help Get-InboxRule -full), one can see that the flag is reserved for Microsoft internal use. It is therefore not usable to detect rules that were made hidden by the method described in step 4.

Evidence of hidden forwarding rules, transferring messages to other mailboxes, might be found in the “Message Tracking” compliance features of Exchange (enabled by default). The logs will include an entry for each forwarded message. Note however that rules with other actions, such as deleting selected messages before being read by the victims, would not be tracked by “Message Tracking”.

The currently only way known to us, how to reliably detect hidden inbox rules, is through the use of a MAPI editor such as “MFCMapi”. The tool allows us to get raw access to the underlaying storage database and to list corrupted or suspicious rules.

The best way to remove hidden inbox rules is again through a MAPI editor such as “MFCMapi”. Alternatively, you can run Outlook with the “/cleanrules” flag. This however removes all the rules on the corresponding mailbox (not only the hidden ones). 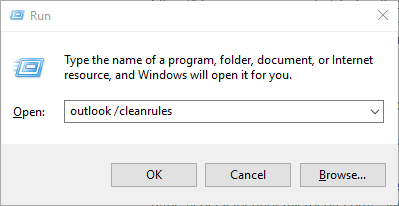 Unfortunately, both these methods are not easily applicable corporation-wide (but only on individual mailboxes).

We informed the security response center of Microsoft about the identified way to hide inbox rules. Here is what they replied:

“[…] Our engineering team investigated the behavior that you described. They determined that it is not considered a security issue because it requires control of the account to create these rules. However, they are considering ways to improve the software in the future.”

We will leave the reply without further comment. Be aware that in case of a compromised Exchange account, solely changing the accounts credentials and reviewing inbox rules by your administrator might not necessarily stop an attacker from gaining access to a victim’s emails. An in-depth forensic investigation might be required.

Compass Security is a Silver Sponsor at this year’s Swiss Cyber Storm security conference [Ref. #4]. We will have a talk were we further elaborate on the topic of hidden inbox rules. Join us for the talk, or visit our booth and play a round of darts to win some beers.

In this article, we described a method for creating Exchange inbox rules that are not shown by Outlook/OWA and the Exchange Management Shell. The precondition to this is that an attacker has access to the victim’s mailbox. Changing a victim’s credentials and looking for existing inbox rules by your Exchange administrator might not be sufficient for the detection of such rules. Microsoft is not considering the described method as a security issue.